About Before your trip
Covered in lush temperate rainforest, surrounded by pods of killer whales, inhabited by very few humans and resident to many genera of flora and fauna, Vancouver Island is a beautiful place to visit. It lies around 30 nautical miles off the coast of British Columbia’s largest city - Vancouver, hence the name, and has been a popular tourist destination for many decades.
Vancouver Island is known for its mild climate and thriving arts community. On its southern tip is Victoria, British Columbia’s capital, and its boat-lined Inner Harbour, neo-baroque Parliament Buildings, grand Fairmont Empress Hotel and English-style gardens.
Heading “up island” on the Malahat Highway, you will find the “Harbour city” of Nanaimo, home of chocolate-and-custard Nanaimo bars. This city has an Old City Quarter with shops, galleries and restaurants.
Continuing North past Nanaimo, get back into your card for a road trip along the oceanside Highway, 19A. Stop at Parksville for a stroll along Rathtrevor Beach, Qualicum Beach for a hike along one of its park trails or to explore the waterfall of Little Qualicum Falls Provincial Park, and Coombs Old-Country Market to check out the goats that hang out on its grassy roof. Make one more stop at the hamlet of “Fanny Bay” and enjoy some of Fanny Bay Oysters. You might also want to try out the Kingfisher Oceanside Resort and Spa and make time for the hydrotherapy experience in the spa, finishing off with a seafood dinner at Ocean 7 Restaurant before turning in.
Other options include bike riding through forests, along creeks, and over cedar bridges on purpose-built mountain-bike trails around Cumberland. Alternatively, you could embark on a boat adventure. From late May through August you’ll discover the traditional land and stories of Homalco First Nation – and likely spot whales, eagles and black bears fattening up on salmon before their winter hibernation. 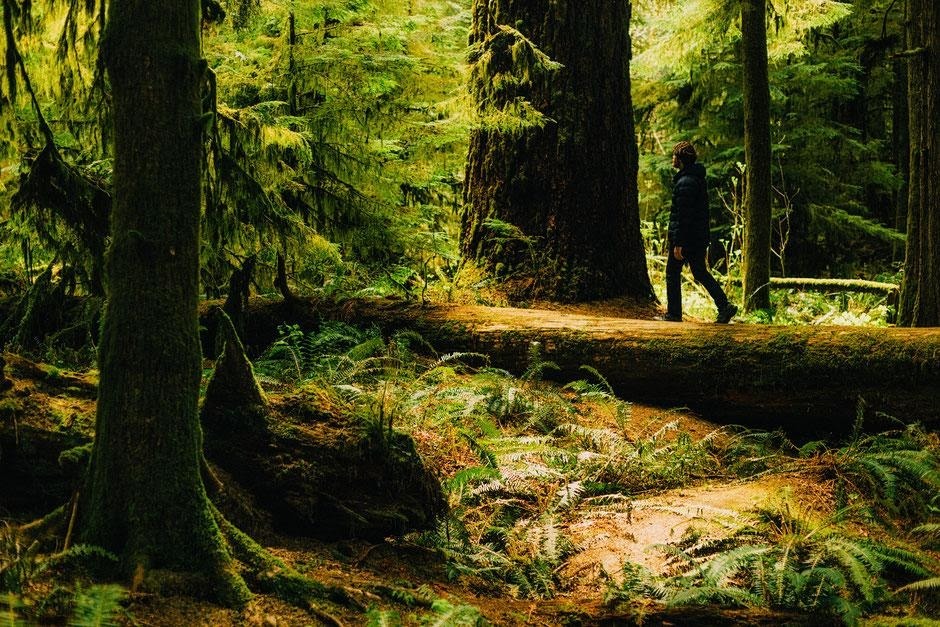 A great way to get around the Island is by campervan. It gives you the freedom of being in the right place at the right time without having to worry about hotel bills. However, driving by car is also a viable option.
WHEN IS THE BEST TIME TO VISIT VANCOUVER ISLAND? Vancouver Island can be partial to some pretty bad storms, most of which come between November and February. This is also the coldest time of the year with average temperatures flirting with freezing point (0C/32F). That being said, it is the quietest time of the year also.
Off-season lasts from November to April. Many of the shops, and most of the campsites, in places such as Tofino and Port Alberni are closed for the winter season.
When the longer days start to bring warmth back to the Island and the darling buds of May start to blossom, the island springs back to life. The spring shoulder season of May and June are a great time to visit. The Island’s not that crowded and the wildlife is already out in full force.
In the peak summer months of July and August, you are going to get the most sun, least rain and beautiful long days, but because of this, you’ll find it hard to find some peace and quiet. Road side pull offs will be jam-packed and parking will be difficult to find at times.
After the summer rush, everything slowly winds down in the shoulder season, from September to October. It’s still warm and the light still hangs around long enough to have a day’s worth of activities. Not a bad time for road tripping either. 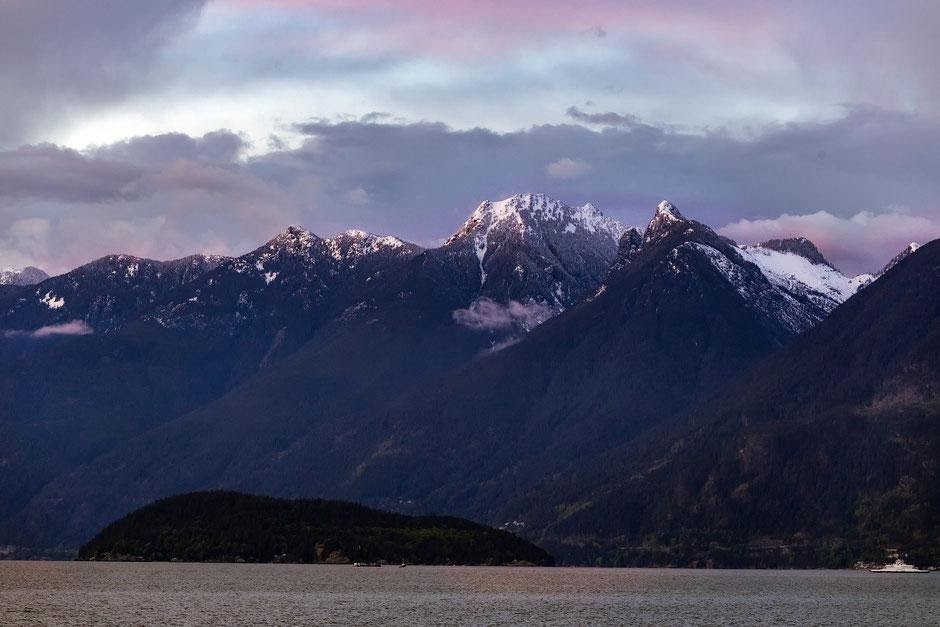 To get to Vancouver Island you will need to take a ferry. There are two major ferry terminals in Vancouver. Horseshoe Bay and Tsawwassen. Tsawwassen being closer to the city centre and Horseshoe Bay being out to the West.
To see the new fare pricing for ferries visit Introducing our new fares. (campaigner.com)
The ferry journey is really spectacular, if you’ve chosen to depart from Horseshoe Bay then you’ll be embarking in the Howe Sound (pictured above), sailing past Bowen Island, crossing the Salish sea and portaging just north of Newcastle Island.
After the initial excitement of the ferry this is where you’ll be left in awe of the spectacle of nature. Head North on Highway 19 until you reach the turn off for scenic highway 4. It is a stretch of 170 km (106 mi) pristine curvy road through the mountainous rainforest. There are several stops you can make on the way to Tofino and back.
LITTLE QUALICUM FALLS PROVINCIAL PARK 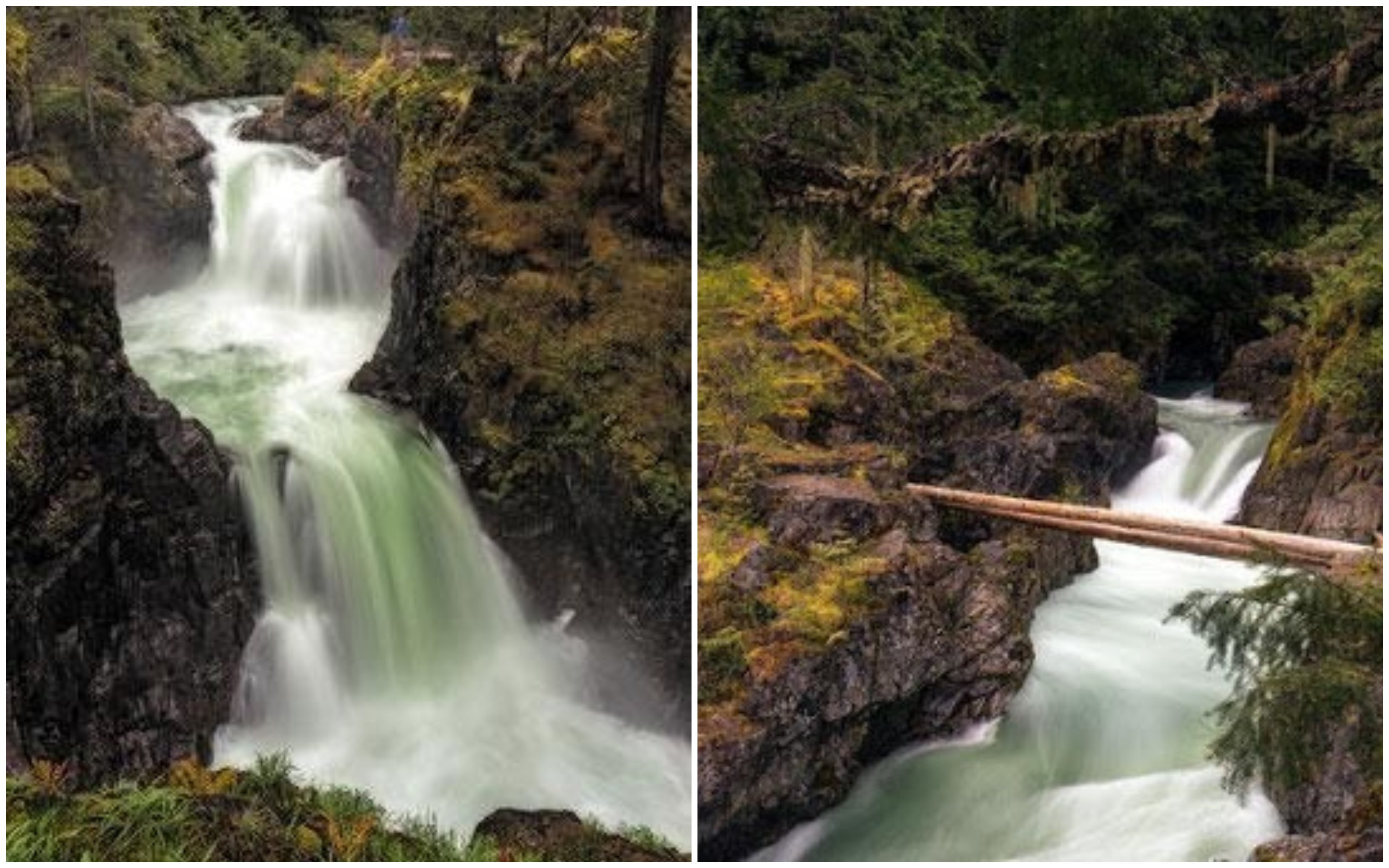 The falls provide a great photo opportunity as you hike between the Upper and Lower Falls.
CAMERON LAKE 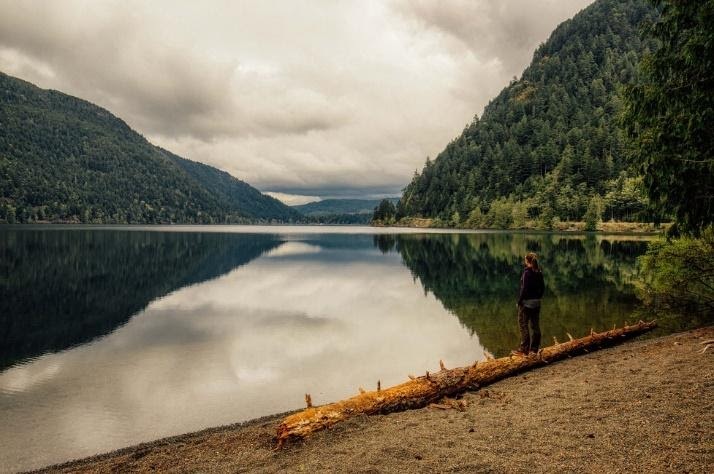 Shortly after you’ve had your warm up on that short hike around Little Qualicum consider stopping at one of the many viewpoints that straddle the shoreline of Cameron Lake. On a still day it offers reflections of the surrounding mountains.
CATHEDRAL GROVE

The next major stop along Highway 4, at the western tip of Cameron Lake, is MacMillan Provincial Park. It’s only a small park but it sure packs one heck of a punch. It’s home to an ancient Douglas-Fir forest, known as Cathedral Grove, which was shortlisted as being one of the seven wonders of Canada. It is pretty impressive. Some of the trees are over 800 years old and almost 3m in diameter!!
Bear in mind that parking next to the Cathedral Grove trailhead is right by the main road and it can get pretty busy, especially in the peak summer months.
THE HOLE IN THE WALL WATERFALL 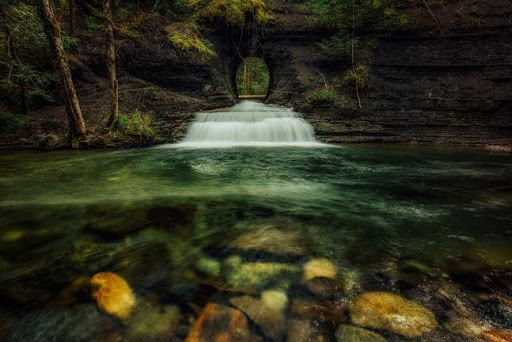 After Cathedral Grove, continue along on your epic road trip. You should be close to Port Alberni. A super place to have some food and take a short stroll to The Hole in the Wall Waterfall. Man-made by blasting through a wall of volcanic shale the hole in the wall was a means to reroute the towns water supply.
The waterfall can be tricky to find. Once you get to Port Alberni follow the signs for the visitor centre where you can pick up a detailed map that will lead you straight to the waterfall.
After Port Alberni the road then continues to wind through the mountains stopping at various viewpoints such as Sproat Lake and Kennedy Lake. It's a bit like a roller coaster ride so make sure to keep your eyes on the road and stop only at designated pull outs.
Once you get to the West coast, it’s a short drive north to Tofino through Pacific Rim National Park Reserve.
SUGGESTED PLACES TO STAY IN TOFINO
Campground
Long Beach Campground
Budget
Whalers on the Point Guesthouse
Midrange
Ecolodge - Tofino
Luxury
Long Beach Lodge Resort 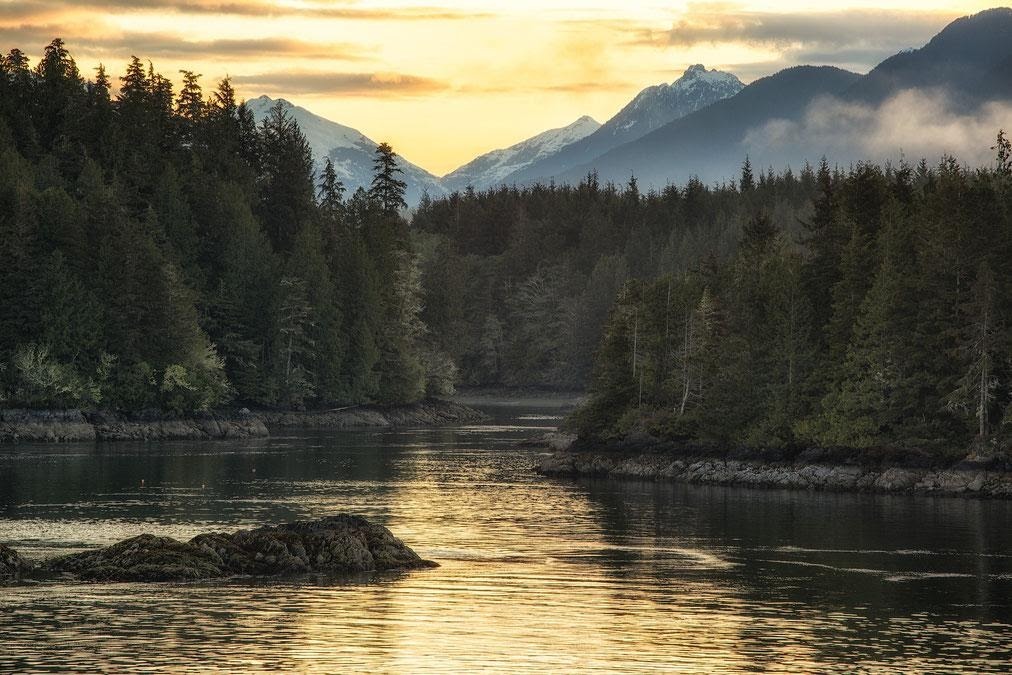 Tofino and the surrounding islands were once small fishing villages inhabited only by the First Nations peoples. Today Tofino is mostly known for being an awesome surfing hub and popular tourist destination. It's rife with coffee bars, restaurants, hotels and tour operators. That being said, it is still a charming tiny harbour town.
THE HOT SPRINGS TOUR
There are 3 kinds of specialty tours. Bear watching, whale watching and hot springs tours. They all cost roughly the same amount of money ($100 per person).
On the way to the hot springs, which takes 90 minutes by boat, you will spend some time looking for grey whales.
Upon arriving at the hot springs, you will hike for 20 minutes through one of many beautiful rainforests on the Island. The natural hot springs are a delight. The water temperature oscillates around 40-45 degrees year around and there are a few different pools where you can soak until it's time to leave.

A mama bear with two small cubs hanging out on the shore. Wildlife appearances are very common on Vancouver Island
HIKE TO THE TOP OF LONE CONE 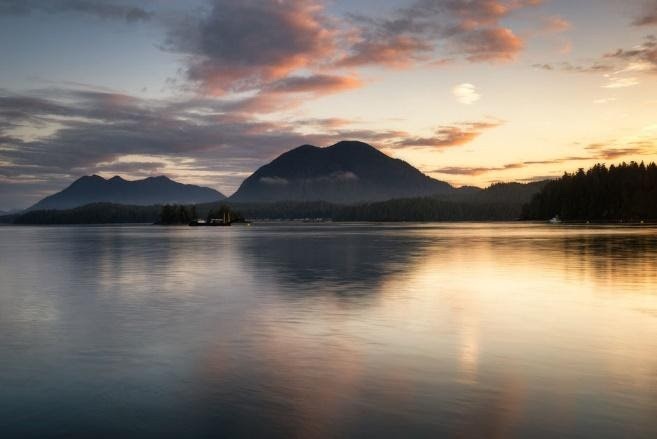 For hikers there’s an awesome trek to the top of the mountain near Tofino, called the Lone Cone. The peak is located on Meares Island to the north, right across from Tofino and should take around 4 hours return to complete.
There’s a campsite/hostel on Meares Island, that offers free water transportation if you choose to stay with them. You can also pay for a water taxi to get across. It costs about $40CAD per person for a return trip. The ride only takes a few minutes and operates on a telephone request basis.
WATCH SURFERS & CATCH THE SUNSET AT PETTINGER POINT 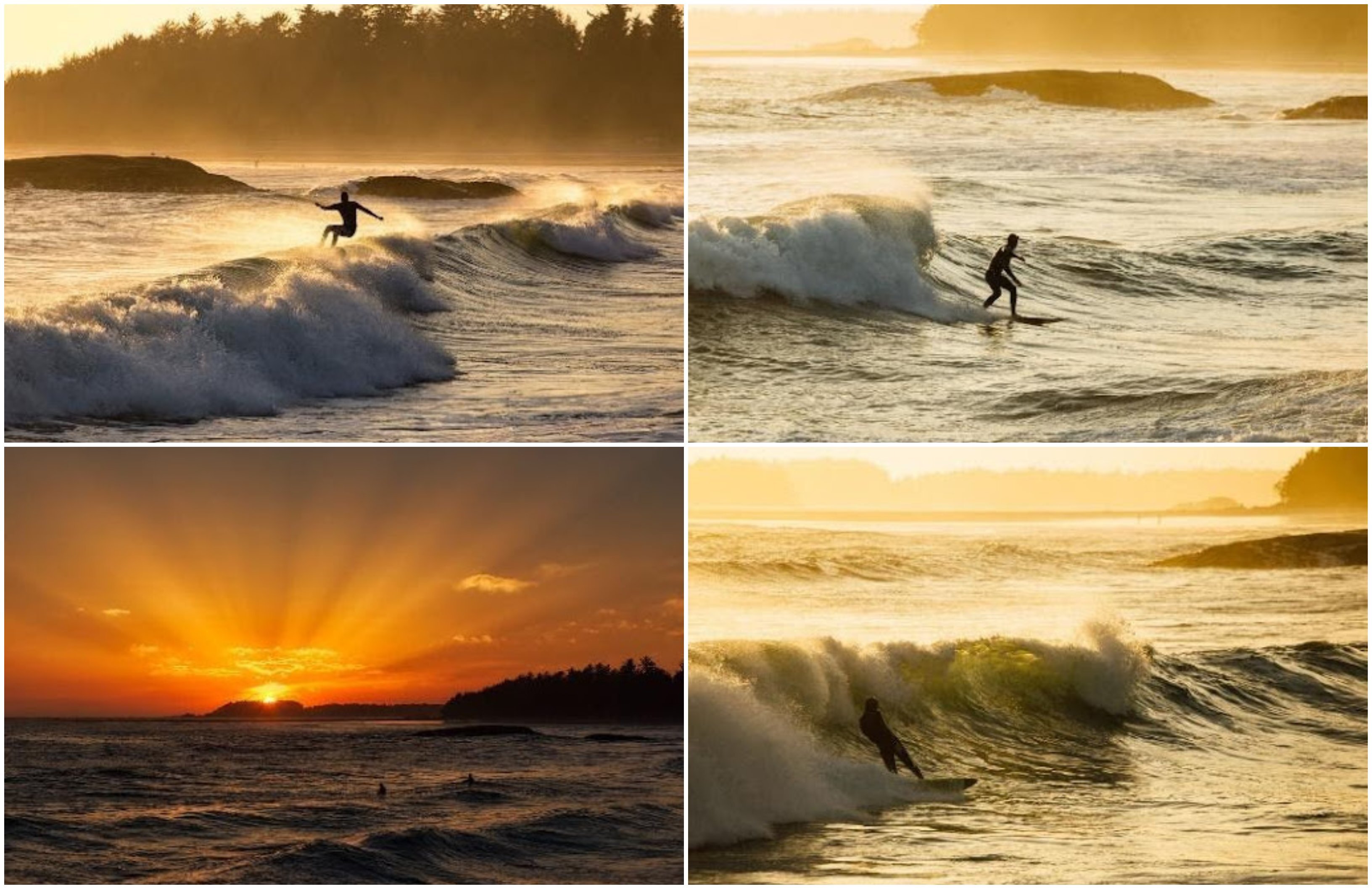 The trail to Pettinger Point heads out toward the beach. The view from the much larger outcrop is a fantastic spot to watch the sunset or surfers waiting for the perfect wave. It should only take you around 15 minutes to get from the road to the point but you could easily spend a few hours there.
To access the viewpoint park your car on a public parking lot near Cox Bay Resort, across from the visitor centre. Walk towards the beach through the resort grounds.
Once at the beach turn right and walk towards the forest until you see a path. The path will take you to the rocks where you can find a spot to sit down and watch the sunset. The walk will only take 15 minutes one way.
EXPLORE PACIFIC RIM NATIONAL PARK 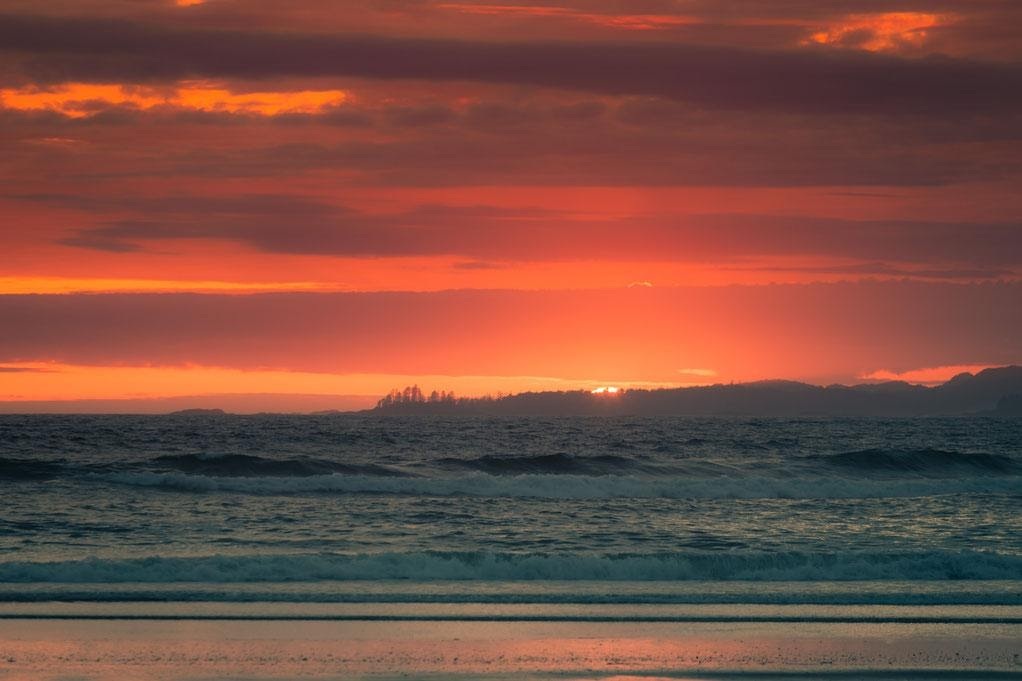 There’s loads of hikes and paths in Pacific Rim, most of which are short affairs that end up on the beach. The national park, which hugs the western shore line receives a lot of precipitation, about 3000mm a year to be precise, which is caused by the coastal mountains. As a result the catchment area is flooded with continual moisture culminating in a dense lush temperate rainforest and many marshes and bogs.
Stop at Tofino's visitor centre, where you can pick up an awesome map with trail descriptions and the trailheads conveniently marked on it.
SCHOONER'S COVE
Best at low tide the Schooner's Cove trail heads through thick scrub before emerging out at the north point of Long Beach. Directly in front of you will be a small outcrop, possible to walk around.
This is only doable at low tide, do not attempt it otherwise. On this outcrop crabs, starfish and sea enema are a common sight. Take some lunch to eat, whilst sitting on the rocks and listening to the sound of the ocean.
THE RAINFOREST WALK 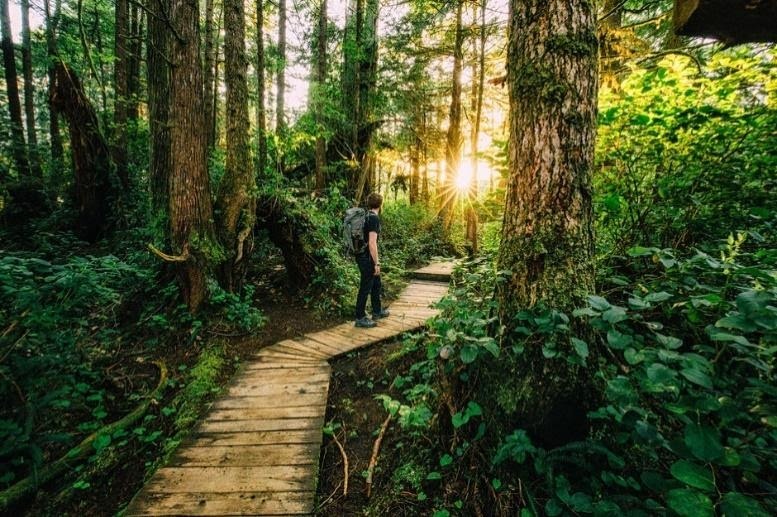 Inland from Long Beach a figure eight track is located on both sides of the highway in two separate one km loops. Both have raised boardwalks through thick foliage, offering a fantastic opportunity to take in the sights and smells of the area.
The trail encompasses 731 steps so is not as easy as a flat 2 km hike, but even with stops at the informative trail plaques and with photography opportunities, it should take no longer than an hour. 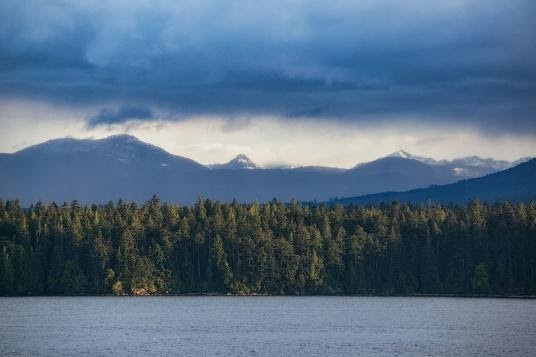 After visiting Northern Vancouver Island, and with several rounds of freshly caught fish ‘n’ chips, many early morning coffees and hopefully some memorable sunrises and sunsets you’ll be reinvigorated with a new lease of life.
TIPS FOR TRAVELLING AROUND VANCOUVER ISLAND
Carry cash. Because a lot of the cafes and other businesses in Tofino are only open 6 months a year they do not accept cards. The ATM's here are scarce and will charge you for withdrawal. Remember cash is king.
Always carry bear spray. Unless you are visiting in the winter carrying bear spray is essential. Know how to use it as well.
Pack a rain jacket with you on excursions as the weather can change quickly. What looks like a blue bird day can become rainy within an hour. After all Vancouver Island is known to be the rainiest place in Canada.
Source: Canada's Enchanting Vancouver Island - 4 day Road Trip Guide - In A Faraway Land
Source: Best Places to Visit in Okanagan Valley: Trip Itinerary & Travel Guide - Thrillist