About River or Ocean Cruises
The Viking name needs little introduction and, as the world's largest river cruise line, it's probably the one that most springs to mind when people think about river cruising. Emerald Waterways, on the other hand, is a relative newcomer -- it launched its first vessel in 2014 -- but its ships have turned heads with some unique features. The line is part of Australian-owned Scenic, which also operates high-end, all-inclusive river vessels.
If you're thinking about a cruise with Viking, you might want to check out what Emerald has to offer. Find out the difference between Viking's Longships and Emerald's 'Star-Ships' in our Emerald versus Viking guide.
Price, Inclusions and Booking Policies
With a raft of deals and promotions offered by both lines (a common practice with virtually all river cruise companies), it can be tricky trying to compare Emerald and Viking prices; which also vary depending on the time cruises are booked and the date of the sailing. In general, Viking's costs come out slightly higher, usually by around $200 to $500 per voyage, but this is not always the case.
Both lines are similar in terms of inclusions and amenities. They sell their itineraries on a cruise-only or airfare-included basis, offer airport transfers and include wine, beer and soda with lunch and dinner. The most notable difference is that Emerald includes gratuities in its fares, and Viking does not.
Choose Emerald if you want gratuities included.
Emerald's fares include all gratuities for onboard and shore side staff. Viking passengers are requested to settle onboard gratuities at the end of the cruise. The recommended amount is €12 ($13.40) per person, per day for the ship's staff and crew, and €2 ($2.25) per person, per day for the program director. Smaller tips, payable in cash, are also encouraged for guides and drivers on shore excursions.
In 2017, Emerald Waterways also introduced a guarantee that provides a refund of up to $475 per day for up to seven days, or $3,325 per person, for issues that include the ship being unable to sail due to high or low water levels, mechanical breakdowns or industrial action affecting the sailing. The guarantee is valid, regardless of what country you book in.
Choose Viking if you want your first choice of cruise or might have to reschedule.
With a fleet of 46 Longships in Europe alone -- compared to Emerald's five -- you are far more likely to get the cruise itinerary and departure date of your choice with Viking. Similarly, if you have to reschedule your trip it will be much easier to find another sailing with Viking. 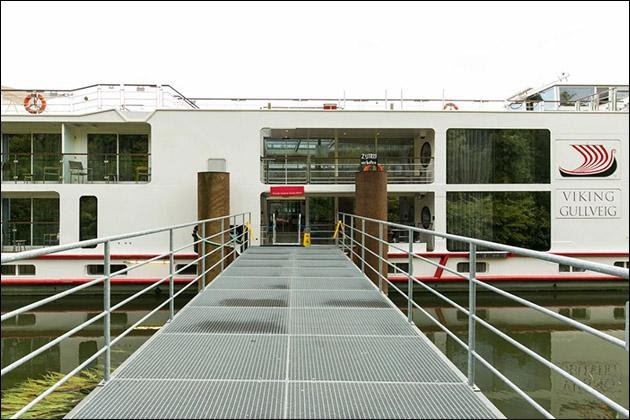 Shore Excursions
The fares on both Emerald and Viking include an excursion -- sometimes two -- at each port of call. The lines work in conjunction with expert local guides and passengers use personal audio headsets to listen to the commentary. These tours are a combination of walking tours and coach excursions into the local countryside, stopping at historic towns, castles, monasteries and other sights. All tours are included on Emerald, and Viking offers some optional excursions, for a fee. These are special interest experiences, such as an art class or Cognac-making workshop.
Choose Emerald if you want more active and complimentary options.
Emerald has a fleet of onboard bikes, free to guests on a first-come-first-serve basis, and also offers escorted bike rides of varying lengths. In 2019, the line is adding Active Managers on their ships to help run the EmeraldACTIVE excursions (while Viking does not have onboard bikes, they do offer cycling excursions in some ports) Emerald's more immersive 'EmeraldPLUS' excursions are included in the fare and there is at least one per week, such as a home-hosted tea with a local family or an evening theater trip.
Choose Viking if you want to take things easy or do your own thing.
Viking goes to great lengths to grade its excursions according to their difficulty level, such as the amount of walking that will be required and any steps or steep gradients. Passengers can also choose between regular or slower-paced walking tours. There is also an onboard concierge who can suggest independent sightseeing itineraries, recommend places to eat and drink and make bookings for spa or hairdressing appointments in each port of call. The concierge service is free of charge.
Itineraries, Demographics and Fleet
No line can top Viking in terms of fleet size, and in total it operates more than 60 vessels. The majority of its fleet comprises 46 near identical Longships that sail on the rivers of Europe and carry 190 passengers. Emerald has a slightly lower passenger ratio, and carries 182 passengers in its five Star-Ships, which are also purpose-built to the same design.
Both lines sail on the Rhine, Danube, Main and Moselle, typically on seven- and 14-night voyages with Viking offering some longer itineraries. Viking also sails on the Seine, Rhone, Garonne, Dordogne and Douro (in 2017 Emerald will launch a new ship to sail on the Rhone and Saone, and another to sail on the Douro, which will be the line's first ship in Portugal).
Choose Emerald if you want to sail with an assorted mix of passengers.
With its Australian heritage, Emerald counts around 50 percent of its passengers from 'Down Under,' with the rest coming from the U.K., United States, Canada and other English-speaking countries. The line's trendy, boutique-style ships also attract first-time river cruisers, including passengers in their 40s and 50s, which is younger than the average river cruise demographic.
Choose Viking if you prefer to sail with a familiar crowd.
U.S. passengers who enjoy traveling with their fellow countrymen will want to stick with Viking. Most passengers come from North America and are a mature, well-traveled bunch, although often on their first visit to Europe. Also on board are a sprinkling of Brits, Canadians and other nationalities. 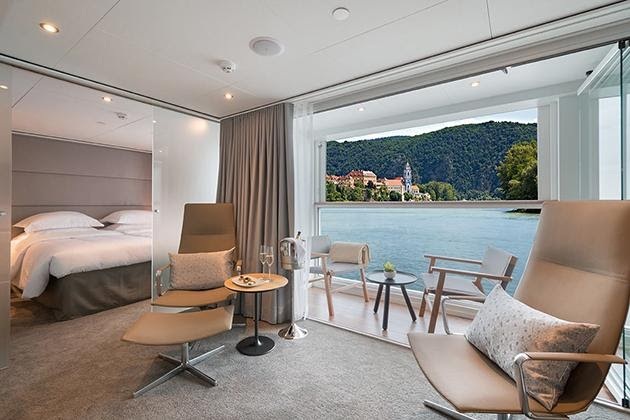 Cabins
Emerald's 92-cabin Star-Ships and Viking's 95-cabin Longships have the same layout and cabin configuration, respective to each line, so here your choice is very much personal preferences. The staterooms on both lines have a contemporary feel, with sleek Scandinavian lines on Viking and a funkier look with lots of mirrors and reflective surfaces on Emerald. Both are well equipped with comfortable beds, large TVs with on-demand films and entertainment, and free Wi-Fi. The biggest difference is that Viking has real balconies and Emerald has what is described as an 'indoor balcony' -- essentially a floor-to-ceiling window that drops down halfway at the touch of a button.
The majority of cabins on the Emerald vessels are Panorama Balcony Suites (even though this name is a slight euphemism), which measure 180 square feet. On the lower deck, standard staterooms are 162 square feet and have a fixed window. There are four two-room Owner's Suites that are 315 square feet and eight Grand Balcony Suites, which are one-room cabins, measuring 210 square feet.
On Viking Longships, Veranda Cabins are 205 square feet, including the walkout veranda, and French Balcony cabins, where you can look out rather than step outside, are 135 square feet. Passengers in lower deck cabins that have a fixed window benefit from more space, 150 square feet in total. Two-room Veranda Suites are 275 square feet and two-room Explorer Suites (two on each Longship) measure 445 square feet.
It's worth noting differences in the bathrooms, particularly for passengers who might have mobility issues. Bathrooms on Viking Longships are accessed from the cabin corridor and feature a good-size shower with, on newer vessels, a pair of glass doors that fold right back to create the feeling of a wet room or generally larger bathroom area. The bathroom door on the Emerald ships is sited alongside the bed, as opposed to facing out into the cabin, and the amount of space between the wall and bed is not great. Some passengers might have difficulty walking between the two, especially if the cabin is set up in a twin bed configuration.
Choose Emerald if you are traveling alone.
There are two single cabins on each Star-Ship that measure 130 square feet. Viking does not have any single cabins.
Choose Viking if you want a balcony and larger suites.
If you like stepping out, and sitting on, a proper balcony then Viking is the line for you. The Explorer Suites on Viking are also particularly spacious and have a wraparound balcony.
Dining
When it comes to mealtimes, there is little to differentiate Emerald and Viking. Food on both lines is consistently good, with imaginative menus that feature regional specialties and 'always available' classic dishes. Both lines include wine, beer and soft drinks with lunch and dinner.
Both serve buffets at breakfast, with made-to-order items off the menu. At lunchtime, Emerald has a buffet with a live cooking station and Viking has a buffet and a served a la carte menu. Neither line has a full alternative dining room, but both serve an early bird breakfast and lighter lunch and dinner options in their lounges, with the option of eating outside. A standout feature on Viking is the Aquavit Terrace, a sheltered indoor/outdoor eating and alfresco lounge area right at the front of the ship. Occupying space used on other vessels to store nautical equipment, it was created by designing the Longships with a blunted, rather than pointed, bow. Both lines have self-serve complimentary tea and coffee stations available 24/7.
Enrichment
Both lines offer similar enrichment programs that are themed to countries visited on the cruise, such as language lessons, cooking demonstrations and shows by local dancers, singers and musicians. On Emerald, staff put on a light-hearted crew talent show. 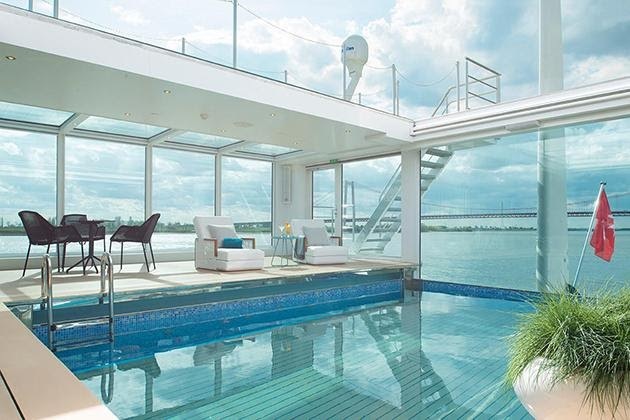 Onboard Amenities
Where Viking scores with its Aquavit Terrace, Emerald comes out on top with its range of onboard amenities. The biggest 'wow factor' is a swimming pool with a retractable roof that converts into a movie theater at night. During the day, the area at the back of the ship is a deep 258-square-foot mosaic-tiled pool and lounging area. At night, the base of the pool rises to create a floor and the loungers are rearranged in front of a large pull-down screen. Movies are screened around three times a week, on a free first-come-first-serve basis, and passengers are given headphones and complimentary popcorn. There is no pool on Viking.
Other amenities featured on Emerald, but not on Viking, are a small gym, massage room and hair salon. However, the Viking concierge can arrange salon treatments and hair appointments for passengers while in port. Ships on both lines have elevators, offer free Wi-Fi and a for-fee laundry service.
Bottom Line
Positioned in the middle tier of the river cruise market, Emerald and Viking both offer good value for money with plenty of inclusions. The final decision comes down to personal preferences. Viking is a good choice for passengers who are more interested in a culture-rich experience rather than extras on the vessels. Emerald will appeal to active types who like to have a range of onboard activities and amenities.

Video: What Happens on a Visit to the Juno Beach Centre?

5 Top Spring Flower Spectacles and Where to Find Them